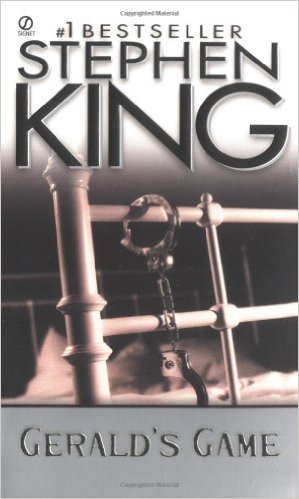 From Kirkus Reviews
King takes it over the top, way over the top, in an exquisitely horrifying frightfest about a woman forced to face her deepest fears–and then some. Jessie Burlingame, 39, is getting plenty tired of being handcuffed to the bed of her Maine summerhouse by her attorney- husband, Gerald, so that he can play his silly sex games. So when Gerald refuses to uncuff her, she kicks him in the family jewels, accidentally smashing them to kingdom come–and the terror begins. Each hand cuffed to a bedpost, the keys out of reach, Jessie howls for help–and is answered by a feral dog that proceeds to chow down on Gerald’s face in lavishly described, muscle-shredding detail. As the long hours pass, cramps bite like iron jaws into Jessie’s own flesh; but they’re nothing compared to the thirst raging through her. Can she somehow reach the glass of water on the shelf above her head? It takes the most tightly controlled writing King’s ever done to find out, but soon even the thirst pales beside the guilt- gargoyles that Jessie’s mind begins to throw up, all pointing at the sun-eclipsed day so long ago when she became much more to Daddy than just his little girl. The minutes tick by, each an agony–and King’s just warming up. Night falls: What’s that shadow in the corner? The one with the smirking face of Death? And how can Jessie, growing into a heartbreakingly brave heroine, escape? She tugs and tugs at her wrists but can’t slip them past the cuffs. Is there a hot, sticky lubricant at hand? He’s not really going to describe that, is he? But, with a ferocious gleam in his eye, King does, out-splatterpunking everyone else on the planet in a tour de force that–even given some overindulgent psychologizing, awfully strong echoes of Cujo and Misery, and a long, peculiar anticlimax–is his most wrenching novel to date. This one is really scary. — Copyright ©1992, Kirkus Associates, LP. All rights reserved. –This text refers to an out of print or unavailable edition of this title.